The plaque commemorates the life and work of Wakefield studio pottery collector, William Alfred (known as Bill) Ismay (1920–2001), who was awarded the MBE for his services to studio pottery in 1982. From his two-bedroomed terraced house in Wakefield, Ismay assembled one of the largest private collections in the world with over 3,600 individual items and a collection of over 10,000 archive records and he is considered the world’s most prolific collector of post-war British studio pottery.

Kevin Trickett, president of Wakefield Civic Society said: “This is another marvellous addition to our growing collection of blue plaques that help to commemorate Wakefield’s heritage and tell the story of some of the city’s most remarkable characters and buildings.”

He added: “Last year, Helen Walsh, Assistant Curator of Decorative Arts at York Museums Trust, approached us about a blue plaque for Ismay. She was working with artist Matthew Darbyshire on an exhibition at The Hepworth Wakefield which included a display of Ismay’s pottery. I have to confess that I’d never heard of Ismay until that moment – but our blue plaques are intended to be educative, so they are definitely working! As a collector of national and even international significance, Ismay is a very worthy nomination and one that the Wakefield Civic Society is pleased to support with a blue plaque”.

Ismay was born on 10th April 1910 and lived at 14 Welbeck Street, Wakefield in West Yorkshire from the age of 18 months until his death in 2001. He was educated at Wakefield Grammar School and then Leeds University where he studied Classics. During World War II, he served in the Royal Signals and spent time in India, a country whose art he grew to love and admire. By profession, Ismay became a librarian and ended up as Head Librarian at the Hemsworth Library in Wakefield before retiring in 1975. He used his limited financial resources to build his collection, which he began in the 1950s. On the death of his mother in 1956, Ismay cleared out many family possessions to make more room for his growing collection, which was stacked and stored on every available surface in his house. As well as purchasing pieces by established makers, Ismay also sought out new potters and supported them in their early careers by purchasing samples of their work, to eventually amass ceramics by over 500 makers.

As well as being a collector, Ismay also wrote about pottery and ceramics and was a founder member of the Northern Potters Association. He was awarded the MBE for services to studio pottery in the 1982 New Year’s Honours list.

Keen for his collection to remain in Yorkshire, Ismay bequeathed it to the Yorkshire Museum on his death in January 2001. It is now managed by the York Museums Trust who have loaned some 700 items to The Hepworth Wakefield for an exhibition, Matthew Darbyshire: The WA Ismay Collection, which runs until 26th January 2014.

Speaking about the Ismay collection, Helen Walsh, Assistant Curator of Decorative Arts at York Museums Trust said: “Ismay’s Collection is one of the most representative of its type in the world and the fact that it was created in a small terraced housed on a librarian’s income and pension, makes his achievement even more remarkable. By ensuring his collection stayed in Yorkshire, he has left the county with a resource of international importance. In 2015, much of his collection will go on display in York Art Gallery’s new Centre of Ceramic Art.”

The plaque has been funded by the Northern Potters Association, with a contribution from York Museums Trust. Barbara Wood, Chair of the Northern Potters Association said: “We were delighted to support the plaque commemorating Bill Ismay. He was one of our founding members and a familiar face at most of our events. Ismay was a true champion of potters and many of our past and current members value being in his collection and hold him in great affection.”

The unveiling ceremony was held at The Hepworth Wakefield on 15th January in front of an audience of Society members and invited guests and was timed to coincide with the gallery's exhibition of examples from Ismay's collection assembled by Matthew Darbyshire.

Guest speakers at the unveiling ceremony included Dr Samantha Lackey, Curator at The Hepworth Wakefield, and Helen Walsh from The York Museums Trust.

The plaque was unveiled by potter Jim Malone who was one of the potters collected by Ismay and who had known Ismay personally. Mr Malone, on the left in the photo below with Helen Walsh, had travelled to Wakefield from his home in Cumbria to attend the event. 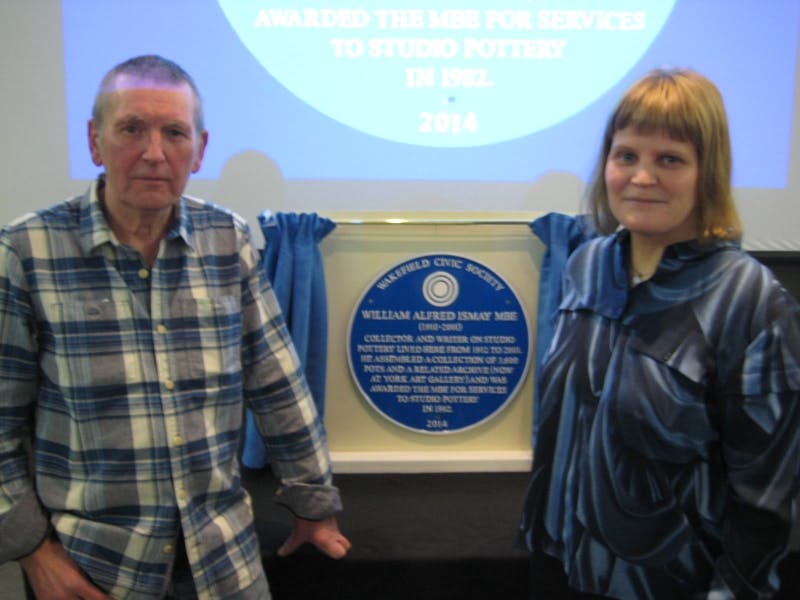 Mr Trickett added: “The Society is extremely grateful to both the Northern Potters Association and the York Museums Trust for their generous donations to cover the cost of the plaque’s manufacture. I would also like to place on record my appreciation to our friends at The Hepworth Wakefield for their support with the unveiling event”.

Arrangements are now being made to install the plaque on Ismay’s former home at 14 Welbeck Street in Wakefield,where the current owner has kindly given permission for the plaque to be affixed to the property.

You can find out more about Bill Ismay at Ismay at the Google Cultural Institute website and also about Jim Malone at www.jimmalonepottery.co.uk/