Blog | Special Screening of This Sporting Life - do you remember the making of this classic 1960s film? Were you involved?

Special Screening of This Sporting Life - do you remember the making of this classic 1960s film? Were you involved? 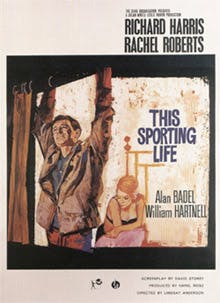 Do you remember the filming of This Sporting Life?

Were you involved in the filming?

As part of the Society’s 50th anniversary programme, arrangements have been made to show the classic 1960s film This Sporting Life at a special screening at Theatre Royal Wakefield on Monday, 22nd September. Since the screening was announced a number of people have come forward to say that they remember the filming taking place or even that they were involved in the filming and the Society is asking for anyone who has memories of the filming to get in touch.

Released in 1963, This Sporting Life is based on a novel of the same name by Wakefield-born author David Storey who also adapted the screenplay. Directed by Lindsay Anderson, the film stars Richard Harris as Frank Machin, a coal miner who is recruited to the local rugby league team, and Rachel Roberts as his landlady and “love interest”, Margaret Hammond. It also features William Hartnell (the first Doctor Who) and Arthur Lowe (Dad’s Army) among a cast of many recognisable actors from the period.

Partly filmed in and around Wakefield, it provides fascinating glimpses of the city as it was in the early 1960s.

The film was Richard Harris' first starring role, and won him a Best Actor Award at the 1963 Cannes Film Festival. It will appeal particularly to rugby fans, local residents and anyone who just likes a good story. It was filmed in black and white and is Certificate 12.

Society President Kevin Trickett said “Last year, we showed the film Kes, another classic from the 1960s but set in Barnsley. It proved very popular so we thought we would repeat the exercise but, this time, we wanted to show a film with a direct connection to Wakefield. Since we announced the screening people have come forward to say that they remember seeing the filming taking place or even, in one case, that they were an extra in the film! We’d love to hear from anyone else who has a memory of the filming”.

The screening is open to members of the public and commences at 7.30 pm on Monday, 22nd September. Tickets, at just £6 (or £4 concessions) can be bought in advance or on the night from the Theatre Royal Box Office, or from the Society in advance by downloading our booking form. The event is also being marketed as part of Wakefield Lit Fest.

Anyone with a memory that they would like to share can do so by either emailing info@wakefieldcivicsociety.org.uk or telephoning the Society on 07967 516841.