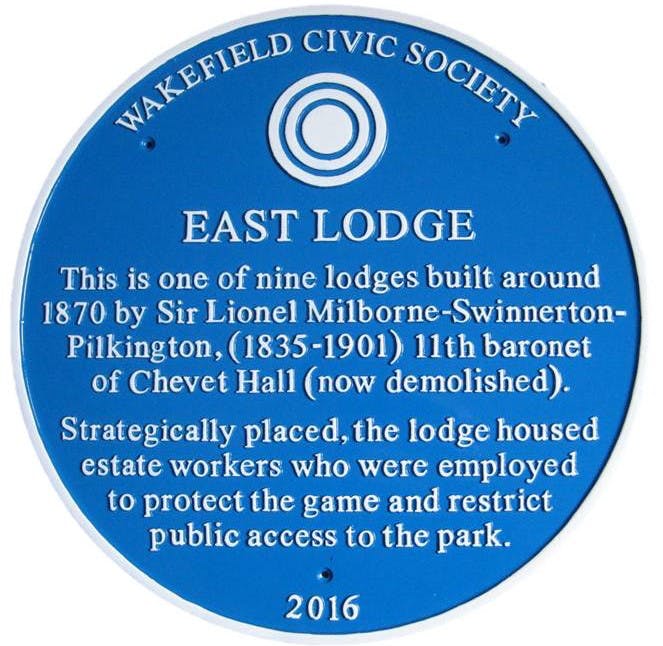 At a special event held at Newmillerdam Boat House on 8th September for an invited audience, Wakefield Civic Society unveiled the latest in its series of blue plaques.

The new plaque, which eventually be erected on the East Lodge at the entrance to the lakeside walk at Newmillerdam, commemorates the history of the Lodge, one of nine originally built for the Chevet Hall Estate around 1870 by Sir Lionel Milborne-Swinnerton-Pilkington, 11th Baronet, who resided at Chevet Hall. The Lodge was used by estate workers who were employed to protect game and restrict access to the park.

The plaque was unveiled by local historian Elsie Walton, an expert on the Pilkington family and Chevet Hall, and has been paid for by Newmillerdam resident, Gill Sykes, who is chair of the Newmillerdam Area Liaison Group. Gill has for some years been raising funds for the community by selling greeting cards illustrated with photos of local landmarks. Gill said “This Plaque will celebrate the history of the East Lodge just as it is about to undergo an exciting restoration project".

Although the unveiling was timed to mark this year’s national Heritage Open Days which run from 8th to 11th September, the unveiling also launches the beginning of a project to restore the East Lodge and to bring it back into community use as a café and visitor centre. The work will be carried out by the Pennine Camphill Community who will run the centre once work is completed, hopefully in time for the summer of 2017.

Kevin Trickett, president of Wakefield Civic Society said “I was delighted when Gill, who is one of the Society’s members, first put forward the idea for a blue plaque for East Lodge and, on behalf of the Society I would like to express our thanks to her for her dedication and generosity in donating the cost of the plaque.

“Each blue plaque we unveil reveals another fascinating aspect of our city’s history and I hope that we shall continue to unveil many more plaques in the future! Of course, with Heritage Open Days falling this month, there are many opportunities to explore Wakefield’s heritage, including some guided walks being offered by the Society on 9th September. Anyone interested in finding out more should have a look at the Heritage Open Days website – www.heritageopendays.org.uk.”