Noel Gay (1898-1954), born Reginald Armitage, best known as a lyricist and popular-song writer. His early training was as a chorister at the Cathedral. At the age of fifteen he won a scholarship, from Queen Elizabeth Grammar School, to the Royal College of Music and became assistant organist at the Chapel Royal, St James’ Palace. Later, at Cambridge, he discovered his talent for popular songs. He wrote the music, and sometimes the words, for a number of revues and musical comedies, including the 1937 musical, Me and My Girl, which includes his Lambeth Walk. 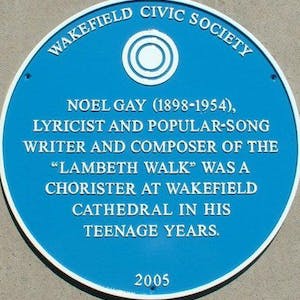